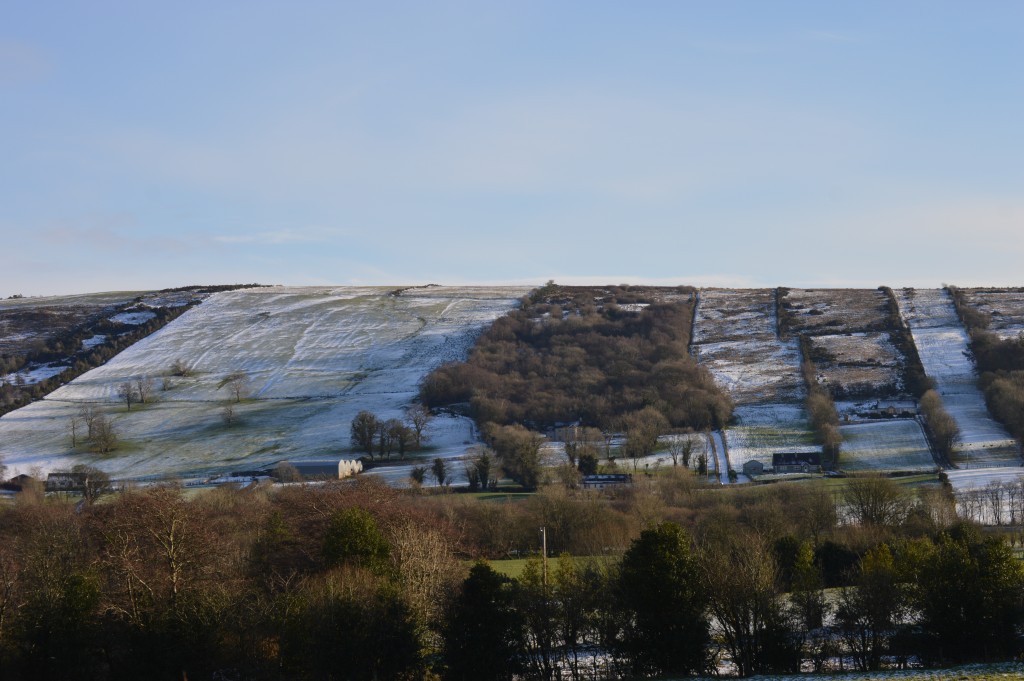 The townland of Owenreagh is an area of about 760 acres and is the smallest of the six townlands. It is bounded on the S.W. by Tullybrick and on the S.E. by Labby and its northern boundary is the Moyola river and Cavanreagh. “Abhainn Riabhach” can be translated into several meanings, grey river, dull river, striped river. Since words in the Irish language are so descriptive in nature and since they do not always translate literally in a precise way, we are left to guess the true meaning of places like Abhainn Riabhach. Part of the townland lies along the flat Moyola river bed, rising up the steep slope of the valley to the flat mountain top which is covered in bogland and rough pasture. One noticeable feature of Owenreagh when viewed from the N.W. approaches, is the narrow striped farms that cover the southern side of the valley.This layout of the farmland was introduced by Stevenson the landlord after he abolished the old rundale system of farms. The idea was to give each tenant an equal portion of arable, hilly ground and mountain grazing. Some of the strips are particularly narrow but these may have been farms which were divided between two sons in the family and at a later date. The farmland in Owenreagh would generally be sandy and dry as it lies on the side of a gravely hill. Perhaps the best known feature in the townland is Lough Patrick, a former place of pilgrimage which has been traditionally closely associated with St. Patrick and St. Colmcille in ancient folklore.

It lies in the high plateau in the most southerly part of the townland and is surrounded by areas of bog flows which can be dangerous to traverse. There is ample evidence to show that this townland was populated as far back as the Neolithic times. The O.S.Memoirs tell us that;

In Owenreagh and on the mountain farm of Patrick Flanagan, there stands the ruins of some ancient stone building locally called the Standing Stones. It occupies 52 feet by 27 feet and seemed to have been enclosed by part of a wall 3 and a half feet thick, and partly by stone columns, one of which stands on the site at present
and stands 5 and a half feet high, two feet broad and two feet thick. The principal part of the building is now destroyed and the site undergoing cultivation.This old monument stood in view of Lough Patrick.

There may have been other sites which were destroyed by this mentioned cultivation as the land was being cleared for grazing in the 1800`s.

We are also told that

In Owenreagh and the mountain grazing of Patrick Connory, there stands an ancient carn of stones which occupies 45 by 30 feet and its summit about 5 feet higher than the level of the hill on which it stands. It was composed of stones of different sizes and different quality from any stones in the mountain.

PHOTO – This monument was left behind by the people of the Neolithic times and is proof of the long history of settlement in Owenreagh.

The whole townland would have been covered in the thick woodlands which characterised the whole of Glenconknye and these would have only disappeared around the early 1700`s.
There was no road through the townland like there is now for this road was only constructed around the start of the 1800`s.The first road into the Sixtowns was the Cavanreagh road which went as far as the Old Church and was in use before that time. When it was decided to continue the road from Draperstown to Omagh the road was constructed through Owenreagh which was a more direct route. The townland once had a tannery which was run by the McHenry family and seemed to have been a flourishing business. There is a sad story about a son of this man who set off on foot to go to the fair in Moneymore to buy some materials. He never returned and some considerable time later, according to a local storyteller, his body was found by a man digging turf near Lough Patrick. It was never determined what was the cause of death
and it remained a mystery as to what happened to him.

In the Griffiths Evaluation of 1854, there is a much wider variety of surnames in Owenreagh. The effects of Stevensons introduction of the straight marches can be seen here where more farms were made available to prospective tenants after the breakup of the Rundale in the Sixtowns. There are a lot of small holdings in the townland and this is characterised by the narrow strip farms which can still be seen over much of Owenreagh.

In this survey there are listed:

This makes a total of 35 families in the townland at that time. However the general population in the Sixtowns had reached its peak by then and later listings show a fall in the number of households in Owenreagh from then onwards.

The next source of information which we have on who lived in this townland is the rent books for 1894.

Listed as rent payers are :

Pat Lagan, Mary McWilliams, Margaret Peaden, Pat McWilliams, Ann Flanagan, George Barnett, Lawrence Hasson, Pat Mallon, John O`Hagan, John McNamee, Pat Deane, MC Deane, Jane Convery, David Graham, John Graham, John O`Neill, Henry McCullagh, Robert and John Graham, David Graham and Ann McNamee.
The 1901 Census gives the most comprehensive source of information on the people who lived in Owenreagh at that time.
It gives a list of those who are living in each house as well as their position the family. It states the age, religion, occupation, Language(s) and literacy levels. This makes it an excellent tool for researching family information.
New surnames on this census are:

There are a number of other new surnames listed as having been either related to the householders or as a servant in their employment. There are 20 households listed in this census which is down by 15 since 1856. 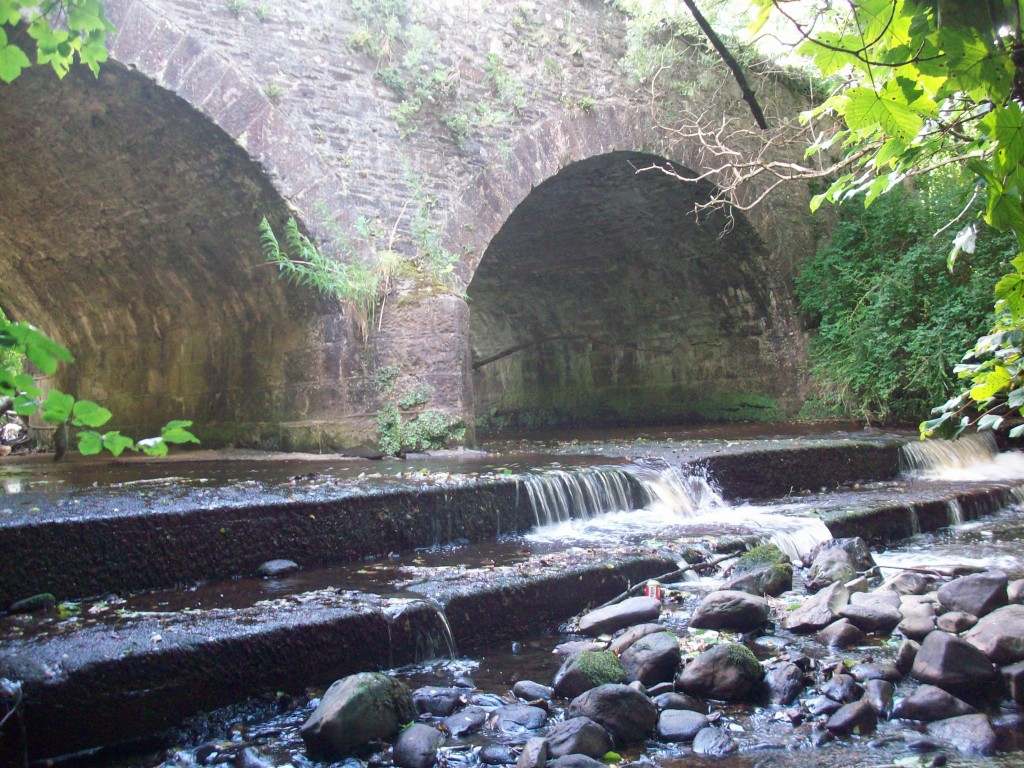 PHOTO – This is what was called Pat Wall`s bridge and it joins Cavanreagh to Owenreagh across the Moyola river.

PHOTO – The Sixtowns Post Office was based in Owenreagh for a couple of generations and was a meeting place for many down the years. It was run by the Devlin family. 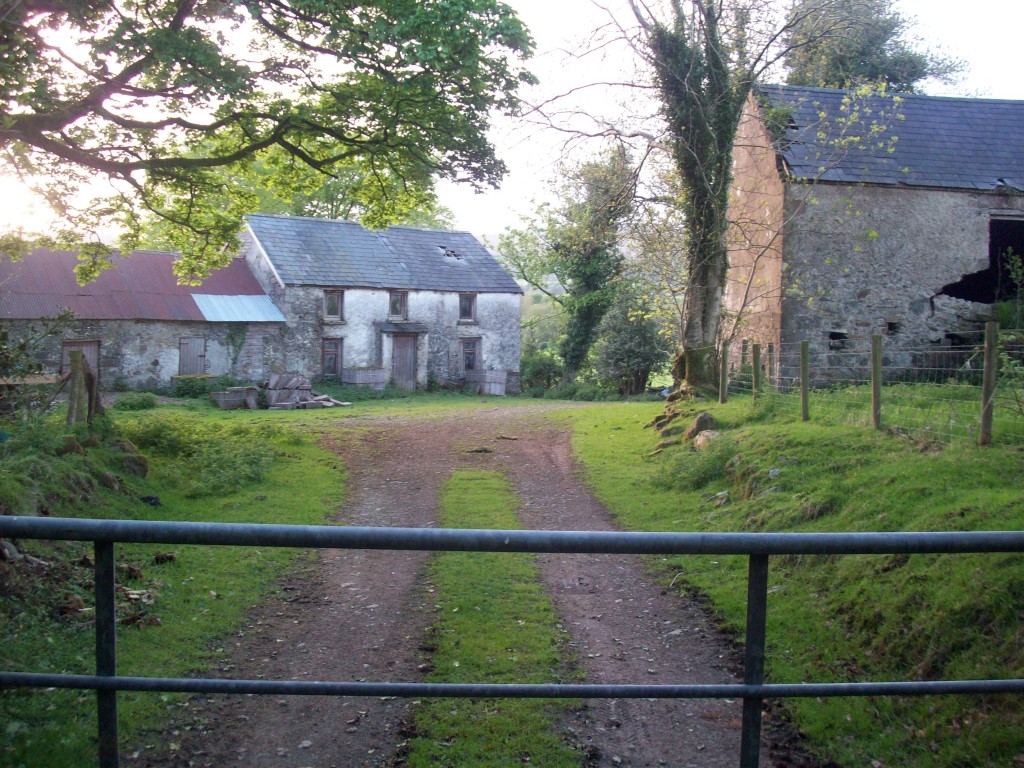 PHOTO – This house belonged to the Graham family in Owenreagh and was typical of many of the farm houses in the townland.