From Paganism to Christianity. 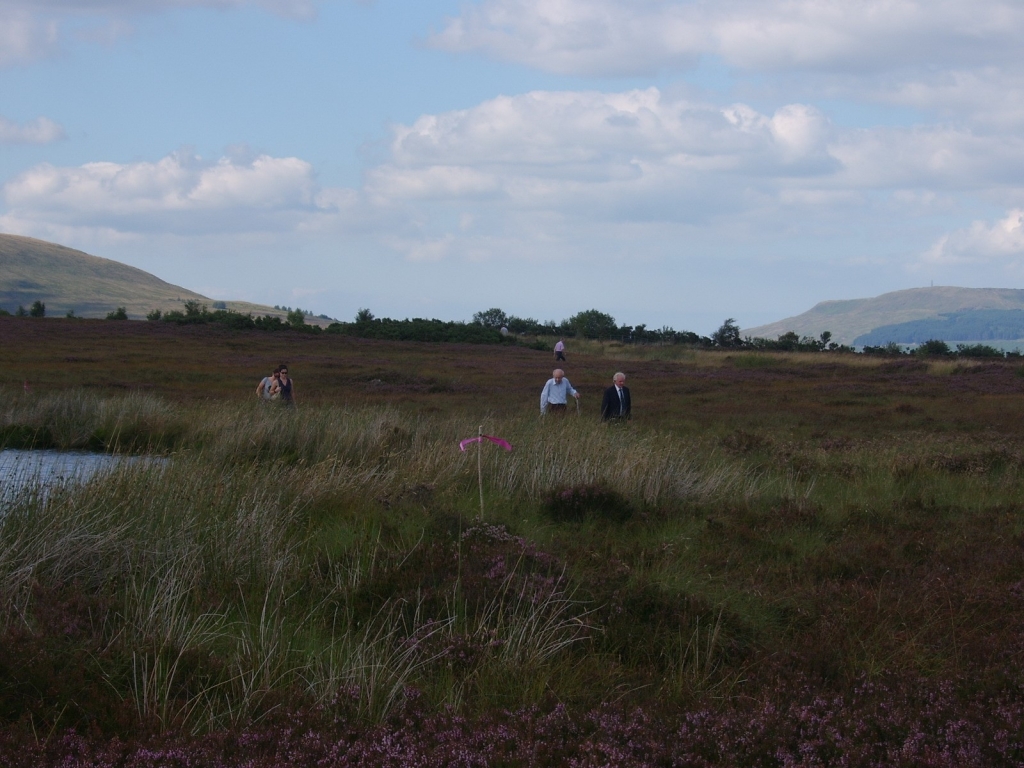 John P Bradley  RIP  ( in the white shirt)  doing the station at 94 years of age, along with Paddy McEldowney

The earliest inhabitants of the Sixtowns lived in the southern half of the area in the present townlands of Owenreagh, Tullybrick and parts of Glenviggan.There are numerous relics left behind to this day to remind us of their presence there.There are two main possible reasons for the confinement of these peoples to the aforementioned parts.Firstly, the first farmers to colonise Tyrone came to Ballinasolus about 3000 years ago and from there they spread out in all directions in that part of the county.They eventually had thickly populated the area and today we know that Tyrone has more than the average amount of Neolithic sites for any county in Ireland.The southern half of the Sixtowns lies into the Tyrone border and an area of it which was heavily populated in those times.Secondly, these people had only got primitive tools with which to till the soil so they preferred to work the light sandy soils which comprise that area from Slieve Gallon right up to Creggan.The stiff soils of the valleys, although much more fertile, were too tough for these people to till.Hence, habitation was confined to the high ground of the southern half of the Sixtowns during that era.

These people went on to inhabit this area for a long time and they lived by their pagan beliefs and practices until the arrival of Christianity.We can imagine how difficult it would have been to convert these people to Christianity and to get them to abandon the old ways and beliefs.However, in time Christianity became the adopted religion and although we know nothing about how this was brought about or how long it took, Ireland eventually became a Christian country.One thing which we can assume is that rather than trying to spread Christanity through coercion or confrontation, it must have been decided to work with the pagan beliefs and ways in order to win the people over.

As a result, old pagan sites were often used as places of worship by the Christians, thus retaining the sacred status of those sites in the eyes of the Pagans.Many old beliefs and superstitions were tolerated by the church, some up until recent times for the same ends.It is no coincidence that places like Lough Patrick and Boulie Colmcille would be retained by Christian Ballinascreen right up until very recently, when that type of tradition seems to have faded out.The last religious pilgrimage to Lough Patrick took place about 45 years ago when a huge crowd made their way to the lough and mass was celebrated in the open on a fine day. More recently, in 2012 Father Kelly PP. Ballinascreen led a pilgrimage to the lough to perform the station and  at Easter 2013, Dawn Mass was celebrated there .

Not that long ago the people believed that Lough Patrick and Boulie Colmcille were places of great religious significance.Many believed the old stories about how St. Patrick was on his way through that part and having stopped to rest at the sight of where the lough now lies, some of his followers became thirsty and asked him for a drink.The saint was said to have caused a spring to gush out immediately and eventually form the lough.It is said that either St. Patrick or St.Colmcille thereafter ordered a station to be held on Mid Summers Eve every year and for some days afterwards for promoting religion and also for the cure of various bodily diseases. 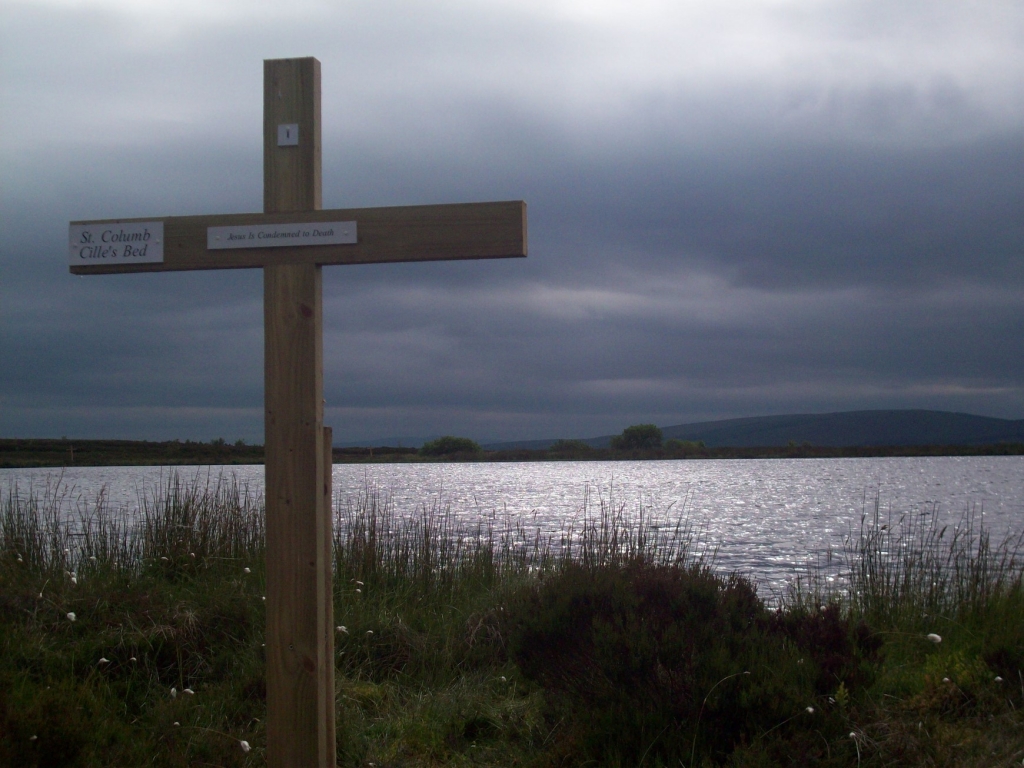 A special feature of this place is the peacefulness and feeling of isolation which provides the ideal atmosphere for prayer and meditation.

These stations were well attended by hundreds of persons, not only belonging to this country but also from England and Scotland, to a very late period, the Roman Catholic clergy commenced to denounce the practice in consequence of improper conduct on the part of many of the visitors. 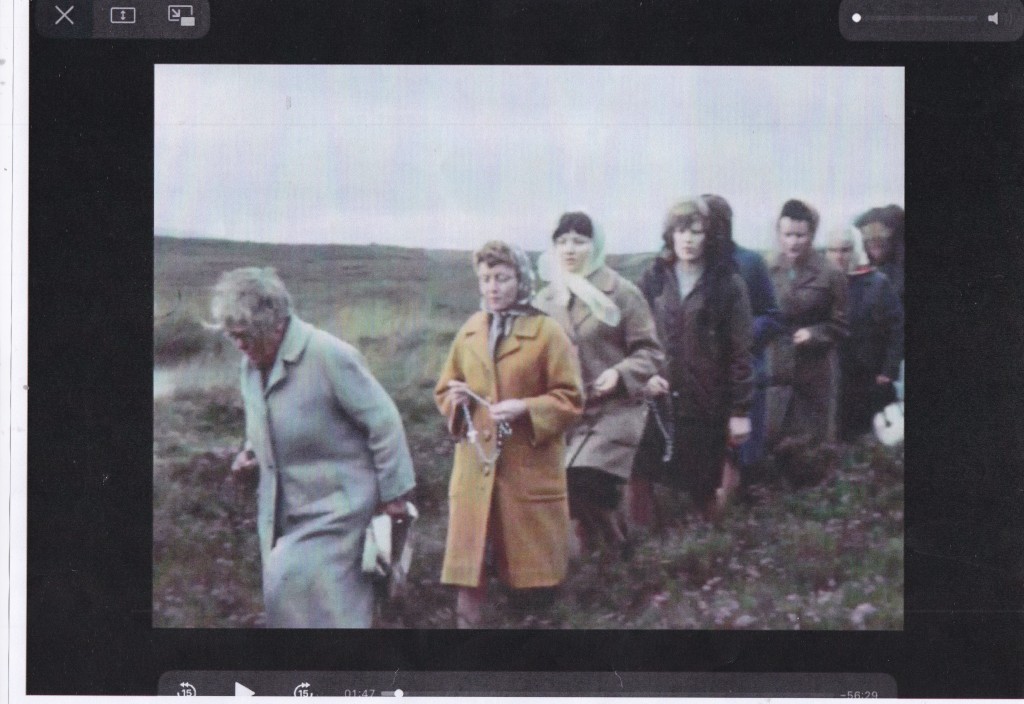 Pilgrims at the stations in the early 1970’s.

The Catholic clergy for some reason did not like these celrbratios and decided to ban them. There is a possibility that this happened at a period when Churches were being built in the parish with the end of the Penal era and that the clergy preferred that people look on these churches as the focal point of  prayer and devotion. The visitors, in performing the station, go 3 times round the lough, praying as they go, and 9 times round a small terrace which stands at the south end of the lough and is called the tummock. At the end of the station, any person who suffers from any kind of ailment, may be dipped in the lough and a remnant of their clothing or a lock of their hair or even some pins ,as a symbol of that ailment being left behind on the tummock. This tummock would have been covered with relics left behind by the pilgrims and there used to be a ring completely sunk around it , made by the knees of those praying. Maggie Mallon who was brought up in the same townland as the lough, used to go up there on Mid Summers Eve every year until she grew too old to do so. She would do the station and wash her hair in the lough. She must have been the last person to practise this tradition. 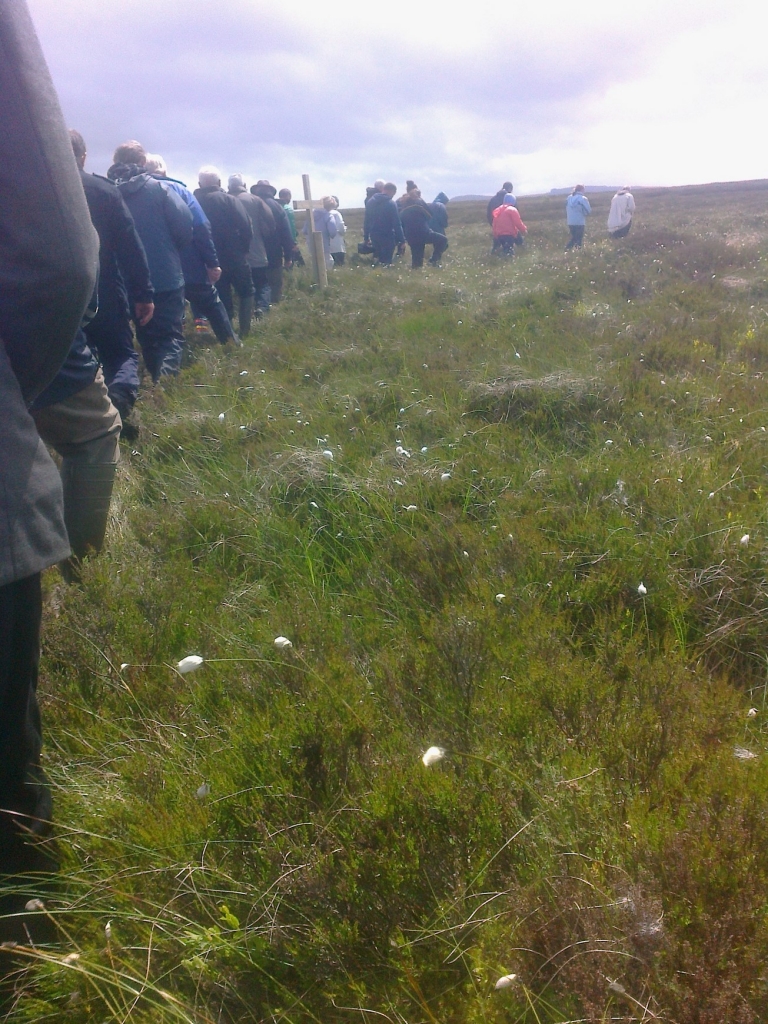 Boulie Colmcille is a small glen close to Lough Patrick which gets its name from being reputed to be the place where St. Colm Cille went while the old church was being repaired at Moneyconey. He was believed to have spent nights and leisure hours praying and performing stations while the church was undergoing repairs.Even if this story is not true it does point out a connection between the old church and Lough Patrick. It is no coincidence that Colmcille would have chosen Bolie Colmcille glen which has a Giant`s Grave in it to make a retreat for himself or is the story again trying to be symbolic about something. 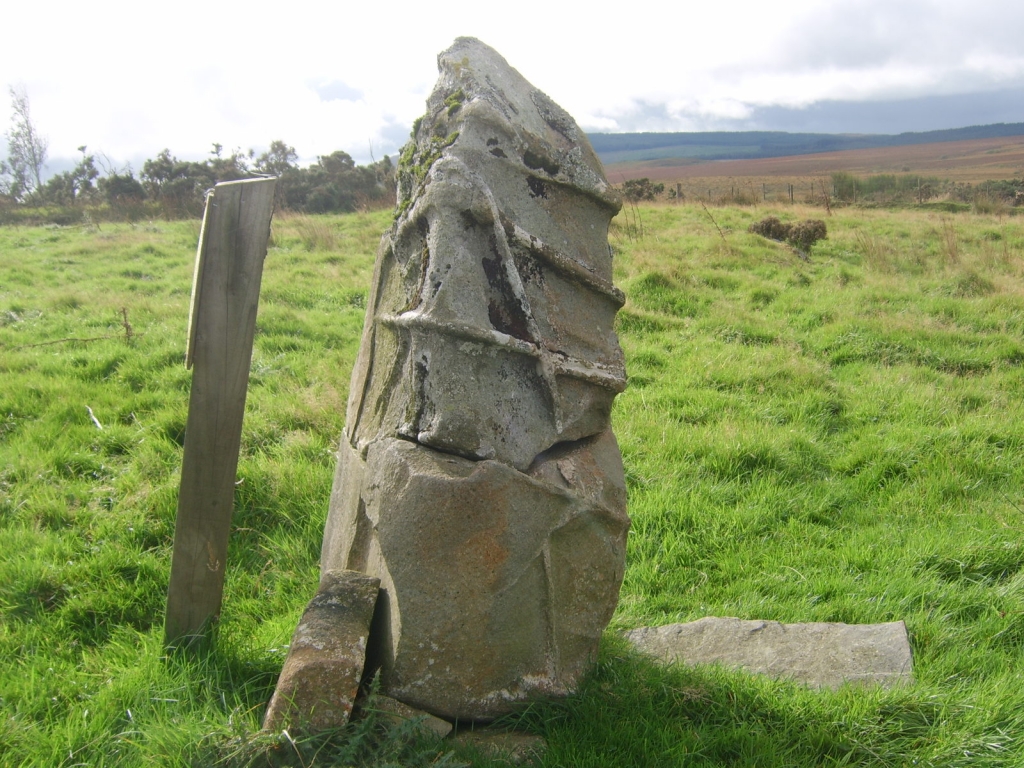 Not far from Boulie Colmcille is a rocky hill, known as Stone Hill. In a field there O`Donovan refers to the existence of a stone which was known in the area as “Bacan na glisha”

It stands 2 and a half feet high and 2 feet broad and 1 foot thick. It is locally said that St. Colm Cille had a cow called glasgelvin which was kept constantly tethered on this stone and that the stone as a consequence was called “Bacan glas gelvin” or “the grey cow`s tether stake.” There is some impression around the neck of this stone said to be caused by the tether by which the cow was confined.
The rope marks referred to in legend, are actually veins of harder rock in the stone which have resisted erosion and therefore stand out as ridges in the rock. It is most likely that this stone had an even greater purpose in the Stone Age times from which it dates and was later adopted into the Christian folklore.

This is a further example of the association between the traditions of the pagans and the Christians which followed them in this area around Lough Patrick. 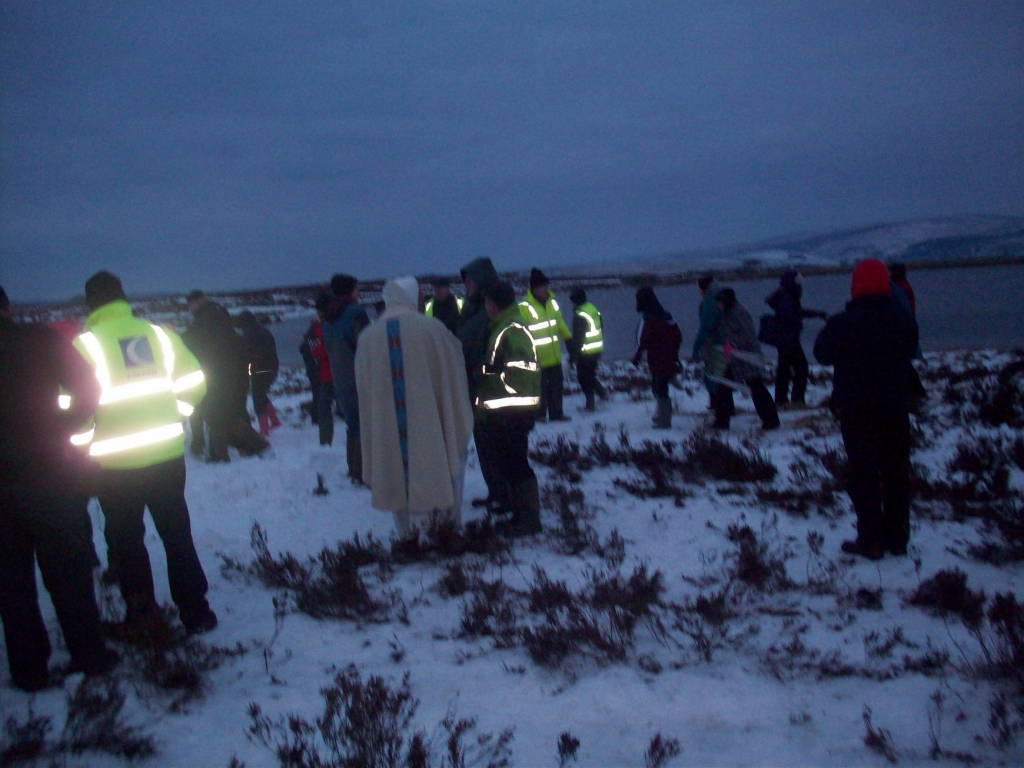