The legacy of the Irish language

The legacy of the Irish language.

By the 1830`s the English language was in common use in most parts of south Derry except for the more remote mountainous regions which included the Sixtowns where it was still in full use. From that point onward its use was on the decline in the area. Irish seems to have survived longest in the upper parts of the Sixtowns. This is borne out in the field names and small placenames which are found in abundance in the townlands of Tullybrick, Glenviggan and Moyard. 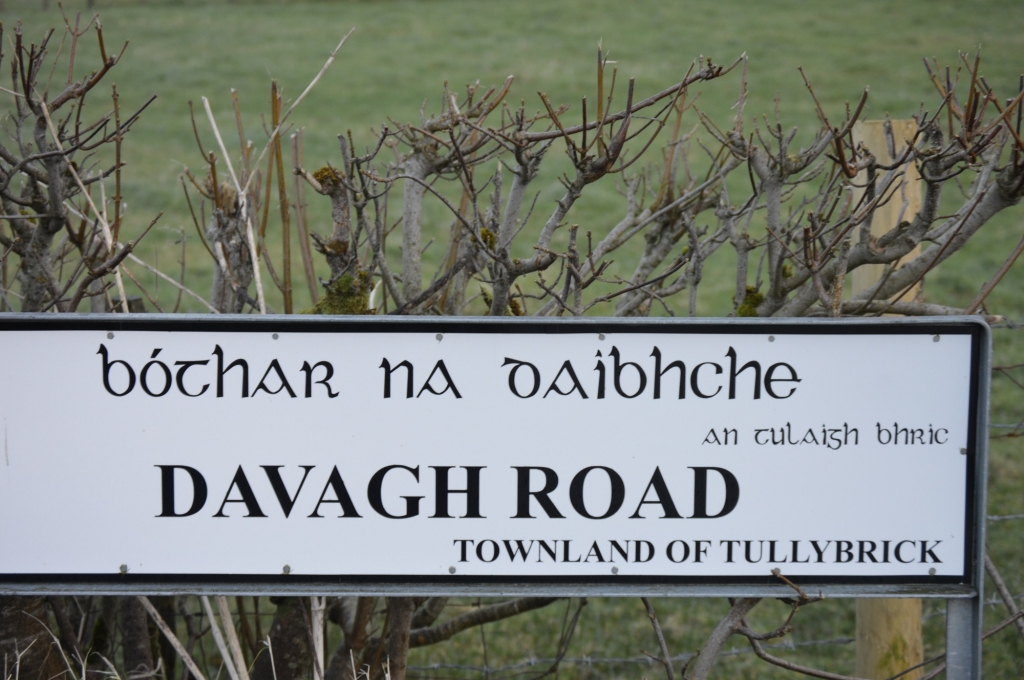 Within these townlands the people, because of their close relationship with the land, had names for so many physical features, like fields, paths small hills, slopes and streams. The fact that the majority of these names were in the Irish demonstrates that the language was in common use right up until the early 1900`s in these parts. Sadly these place names have almost disappeared from use nowadays, with many lost as the generations passed on. However, it is still not too late to gather and record what is left of them so that they will be preserved as a momento to those people and times which brought them into existence in the first instance. The following are a sample of the type of place names which we are referring to which have all but gone out of use in the area.

The Gualann field … The field on the shoulder of the hill.

Undoubtedly these are only a few of the many Irish place names which were in everyday use in the Sixtowns up until the early 1900`s but they do form part of the last traces of the Irish language in our area. Another remnant of the Irish language which is fading fast from our midst, is the many Irish words which were used by the last generation of the people of the Sixtowns and to a much lesser extent the present generation These words cropped up in the conversations of the older people and still do to a lesser extent among the present generation. Here are some examples which I got from my father which would have been used in his youth:

Proverb heard said in English by an older person  : “It isn’t the windy day that the scolbs are made !!” (Ir. “Ní hé lá na gaoithe , lá na scolb”).
Shalls  – Taking  turns at  work / They took shalls  at it. (Ir. Seal/ sealaíocht ?).
Shaskin – Boggy patch (Ir. Seascán).
Sugán -straw rope
‘Shillin’ – Corn (oat)  kernels  that have  been dried and  have  had the husks removed in a mill. ( Often a delicacy enjoyed by  children who would call at the mill on their way home from school).

(Scots -SHEEL, v., n. Also sheal(l), sheil(l), shiel; shil(l), schill, shull.[ʃil; em.Sc. (b) ʃɪl].To shell (peas, grain or flax seeds, etc.), to take off or out of the husk or  pod .The husks, or shilling seeds, are again separated by the fanners, when the shilling, or naked kernels, are committed to the mill, with the stones set so near as to grind them into meal.Lth. 1829  G. Robertson Recollections 254:

Placenames:  sheelin-hill, shilling-, -hillag(Cai.), a knoll or piece of rising ground on which husked grain could be winnowed by the wind.

Happer : Sheelin-happer, a happer or canvas container for holding sheelin;

(Acknowledgement:      The above list of words was recorded from Johnny Bradley (Moyard) by his son Maurice.)

The Irish language begins to die out in Sixtowns.

THE Irish language survived much longer in the upper part of the Sixtowns than it did in most parts of the parish. When John O`Donovan visited Draperstown in 1834 he was most impressed with the vigour of the language in the parish. ”Irish is the language of the parish” he wrote, “The children play, think and box in Irish. It is spoken very well in Moneyneena and Glengamna” He would have been also correct if he had referred to the Sixtowns similarly. The O.S. memoirs of the parish in 1835/6 also state that “There are few parishes that have retained its ancient character for so long, the old songs are still sung and the Irish language spoken. ” In fact so popular was the language in the area that we are told that the Rev. Richard King, curate at St. Anne`s, in the Sixtowns, wrote a religious tract for “the many thousands who speak Irish as their mother tongue in the district around here.” According to the 1851 Census returns, there were more than 5000 native Irish speakers in the area. This was an estimate which was later said to have been certainly conservative. No doubt these figures were for the wider area of Ballinascreen but we can take it that the Sixtowns would have been included. Also, Robert McAdam declared that the language was not just confined to one section of the community. This gives an idea of how prominent the Irish language was in the Sixtowns at that time. King`s book, was most likely to have been aimed at his own community for we are told that when St. Anne`s church at the Sixtowns was officially opened in 1843, the sermon was preached in English and Irish and that the concluding hymn in the service was in Irish. In fact the first curate of St. Anne`s church in 1843 was a professor of Irish studies in Trinity College and on the day of his inauguration there were 80 teachers of Irish in attendance. 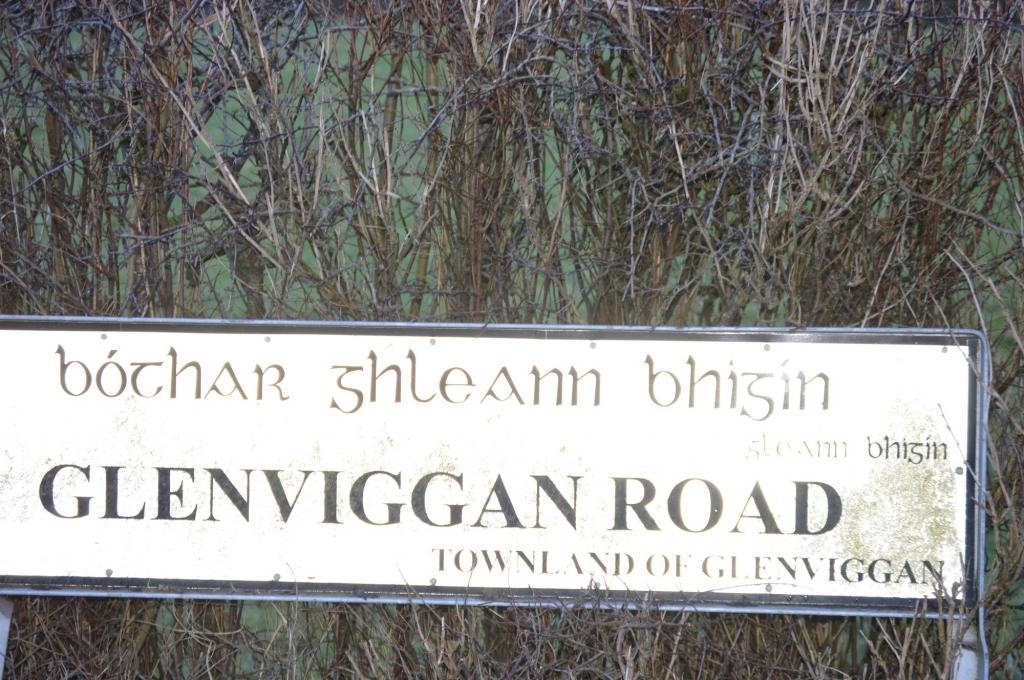 One wonders why the language fell so much out of use throughout the Sixtowns area after this period. It is evident, through talking to the old people of the area, that there were people still left in the early part of the last century who could converse to some extent or understand the language to some degree. In the Census of 1910, which have recently been released for viewing, there are many people in the upper parts of the Sixtowns who declared that they had both Irish and English. In Moyard 16 households declared themselves as having both Irish and English. There were 6 in Tullybrick and two households in Owenreagh.Moneyconey had 4 households which had both languages and Glenviggan had 5.

The state of the Irish language in 1926.

In 1926 the Irish Free State government carried out a report on the state of the Irish language in the whole island and the used the recordings of a survey carried out in 1911. The percentage figures given for Irish speakers in the Sixtowns was 14.3%.This would more or less back up the figures given in the 1910 Census for those people in the area who used both Irish and English. There is also evidence of the language having lasted longer in these townlands in the amount of field names and landmarks which are in Irish and are listed above. There are also quite a few words which were in common use among the older people, some of whom are still alive. These were mostly words which were still preferred to the English, in that possibly, it was felt that they described something better in the eyes of the users. I have given examples of these above as well. The very last part of the legacy of the Irish Language in which is possibly less valued is the accent which characterises the people of the area. Even with the disappearance of our native language from use, we still retain that phonetic flavour of the Irish language in our speech. Our accent tends to be broad and to have different emphasis on parts of our words. It is such an unique aspect of our heritage in the Sixtowns and something to be cherished and proud of.