Hunting as a sport. 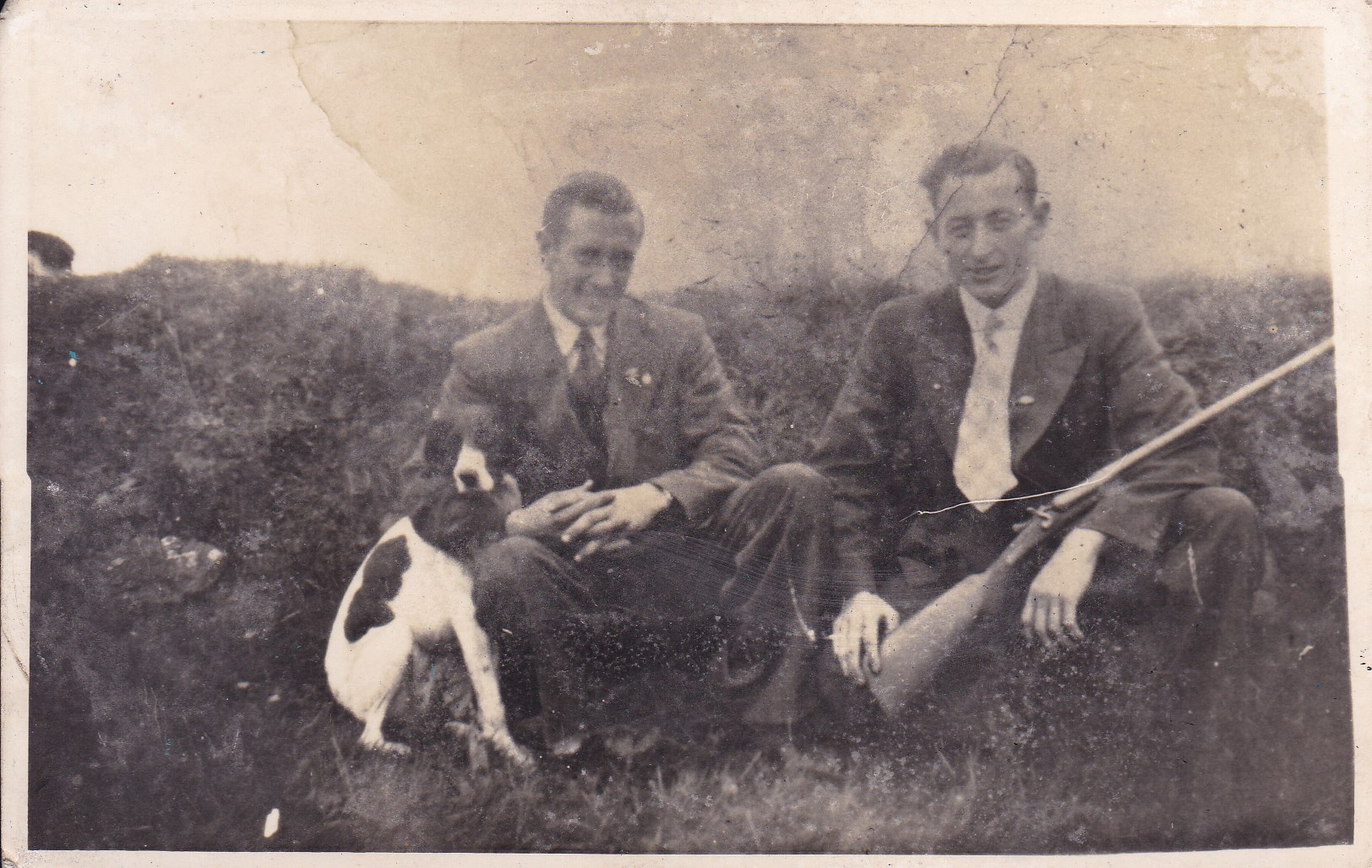 “Pooching.” is probably a local term for hunting which harks back to the days when the landlord owned all shooting rights and the tenants would be looked upon as poachers.

Hunting has been the great pastime of man since the earliest times when his prowess at this activity was the difference between life and death for him and his people. As man became more domesticated over the ages he became less dependent on hunting for survival. Gradually it became more of a sport and this continued all across Ireland up until the big landowners had carved up the land into estates. From that point onwards peasants or tenants were not allowed to shoot , fish or trap game on the estates. Sixtowns was the estate of John Stevenson, of Tobermore and the rules were the same as on all other estates. The people could not get their head round the fact that the wildlife in their townlands could belong to particular people and that hungry as they were , they could not catch game which was in their sight lines almost daily.

Like all other landlords Stevenson had paid gamekeepers who kept a sharp eye out for anyone who might infringe on the rules. The best known gamekeeper in the Sixtowns was a M C Deane from the townland of Owenreagh. His son Wash (Washington) Deane took over from him some years later. There is mention in the Griffiths Valuation of a gamekeeper called Flanagan from Owenreagh. There were others who performed this role at various times, Joe Conway (Jack) Moyard having been one. It is likely that anyone who was in arrears in their rent payments may have been offered the post as a way out of their predicament.

The gamekeepers were not very popular among those who wanted to do a bit of hunting and defiance of their authority often led to confrontation. There is the story of the young Bradley (Cormac) fellah who when confronted and chased by the gamekeeper across the mountain, fired a shot at him to help himself make good his escape. That he did but when he arrived home and told his family what had happened, they began to fear that they would be evicted and had a rip roaring row with their son and told him how he had brought such trouble and shame to them. “Well, says he, it will never happen again and he gathered up a few belongings and headed off down to a “convoy“ (party) which was being held for some young people who were emigrating to America. He left with them and went to America. His family never heard of him again.
Families were terrified of being evicted if they were caught or even reported for poaching. It still did not deter some people especially outsiders. There is a record in an old newspaper archive of an incident which took place in the mountain lands of Owenreagh in 1895. It underlines how serious the gamekeeper took his job and the local sympathy of the local people for the poachers. 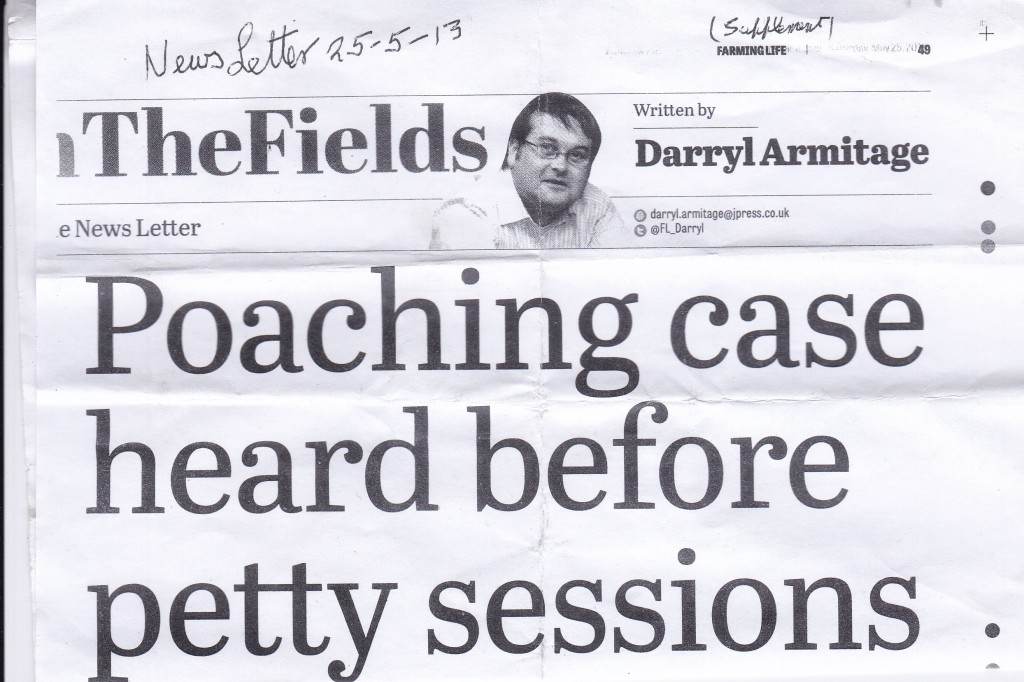 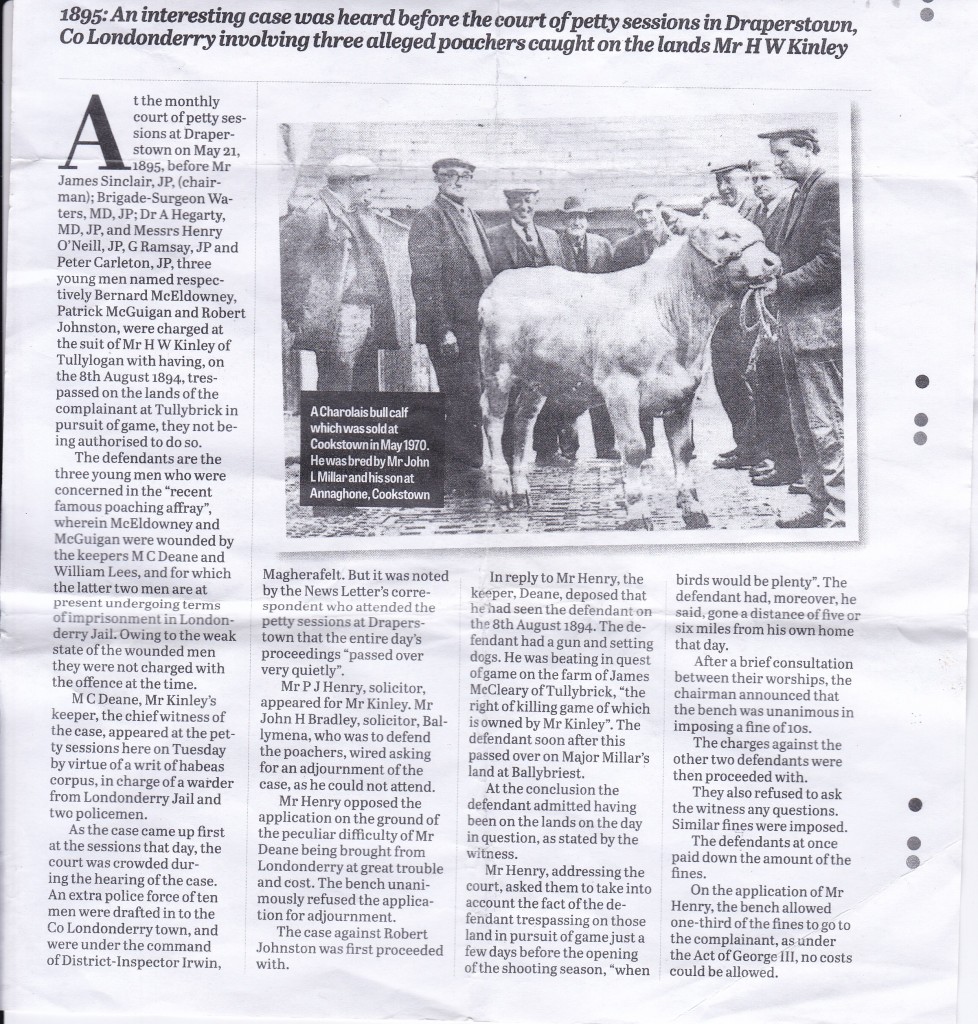 There is another account of a man called Clarke from Gortin who was known to be a fearless poacher and certainly not one to take issue with about his activities. He would come over into the Sixtowns and just shoot where he liked and few would challenge him. One Sunday morning he was poaching in Altayeskey glen close to the chapel with a bunch of his men. In the middle of the serenity of the mass they let a volley of shots off at something or perhaps to show his disregard for church or authority. The people inside the chapel were shocked at his audacity. It was told that the Parish Priest was preaching on the altar andf as he raised his two hands in the air to make his point, the volley of shots went off. Later that day, local man Joe Conway (Jack) who was acting as gamekeeper approached Clarke and his men on the mountain. They immediately took him prisoner, stripped him naked and plastered him with peat moss. They threatened him with what they would do with him if he ever confronted them again.

Not everyone was as brazen as that and manys the man who went out at night “lamping“ fish with his lamp and gaff. Small groups of men would sneak along glens and river banks from Davagh to the Moyola. Some were very good poachers and made an art out of it over their lives while others would only go out occasionally for a bit of adventure.

As the years went on after the end of the landlord era, local police became responsible for the upkeep of gaming laws. Police were more numerous then and the sergeant would be glad to send them out of the barracks to look for poachers and get his head showered. Some policemen actually enjoyed this hunt and got involved in many incidents with local poachers. One story is told about a young man called Barney Conway from Glenviggan who was out on the mountain poaching with a friend when a group of policemen appeared down at the main road on bicycles. Now Barney was well known in the parish for being an athletic young man who was game for anything. One of the policemen was a well known cross country runner in Ulster. Barney and his friend ran off up the mountain and in an attempt to escape. It was said that the policeman who was the runner, when he saw them run, took his time preparing himself for the chase telling his mates that there was no need to rush that he would soon run them down. After a short time he headed off in pursuit but he never caught up with them. After some time Barney`s mate fell on the ground exhausted and said that he could not go any further. Barney hid him in a clump of tall rushes and continued his run until he shook off his pursuer for good. The policeman had great respect for his escapee when he returned to the main road exhausted. So impressed were the policemen with the incident that it was actually they who related the story to the locals afterwards.

Poaching or “poochin“ as it was referred to in the Sixtowns gave many men an outlet and a welcome escape from their toils from time to time and the stories of their adventures would be told over and over around the firesides as they `ceilidhed` with their neighbours on long winter nights.

Below we have another court case involving a young man who must have made “pooching” into a bit of an art. The landlord or whoever “owned” the hunting rights took this activity very seriously indeed. 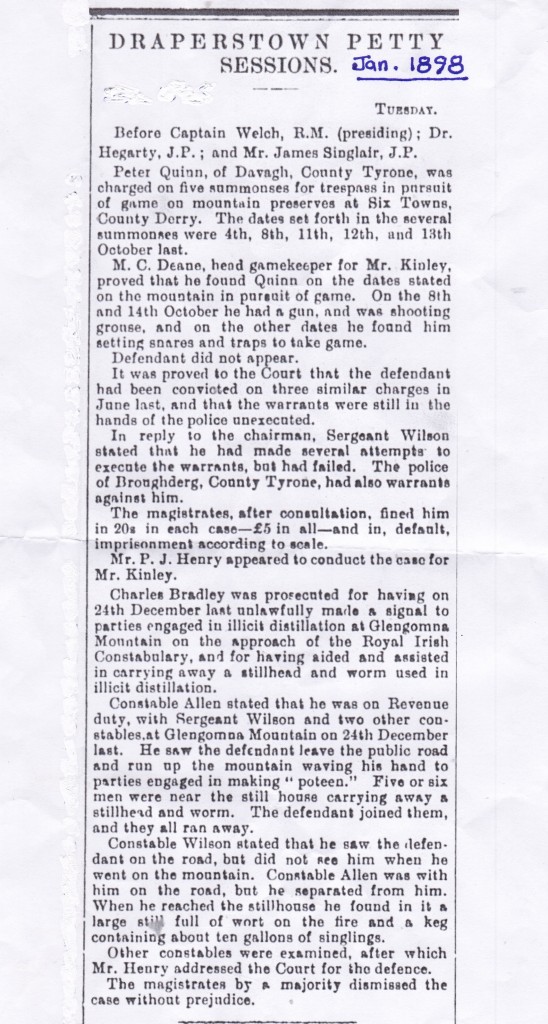 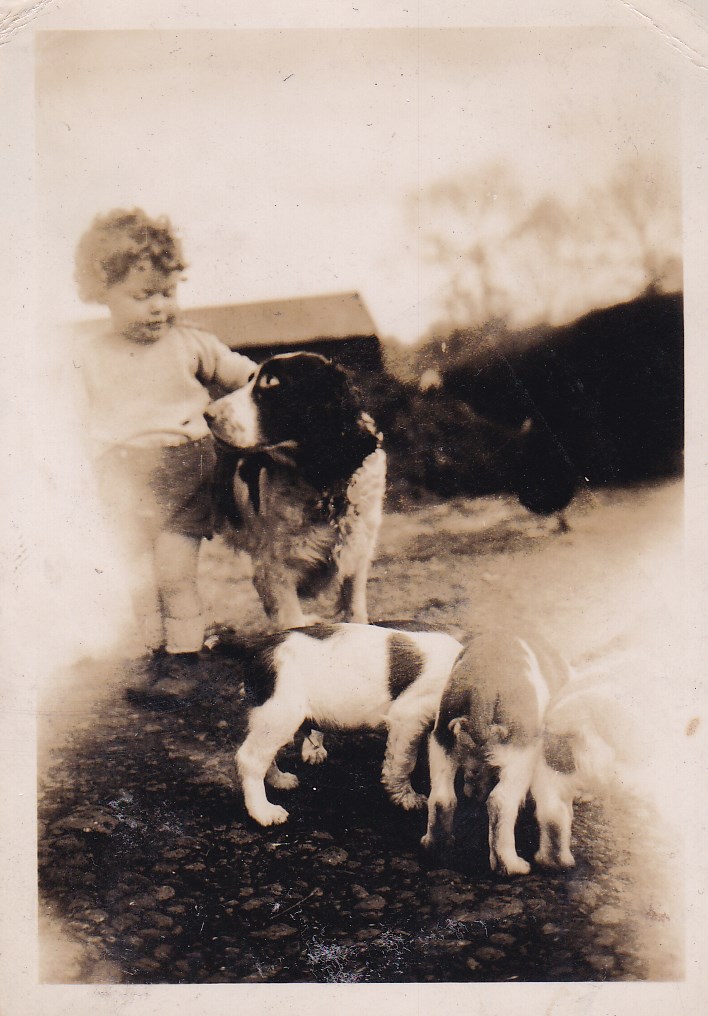 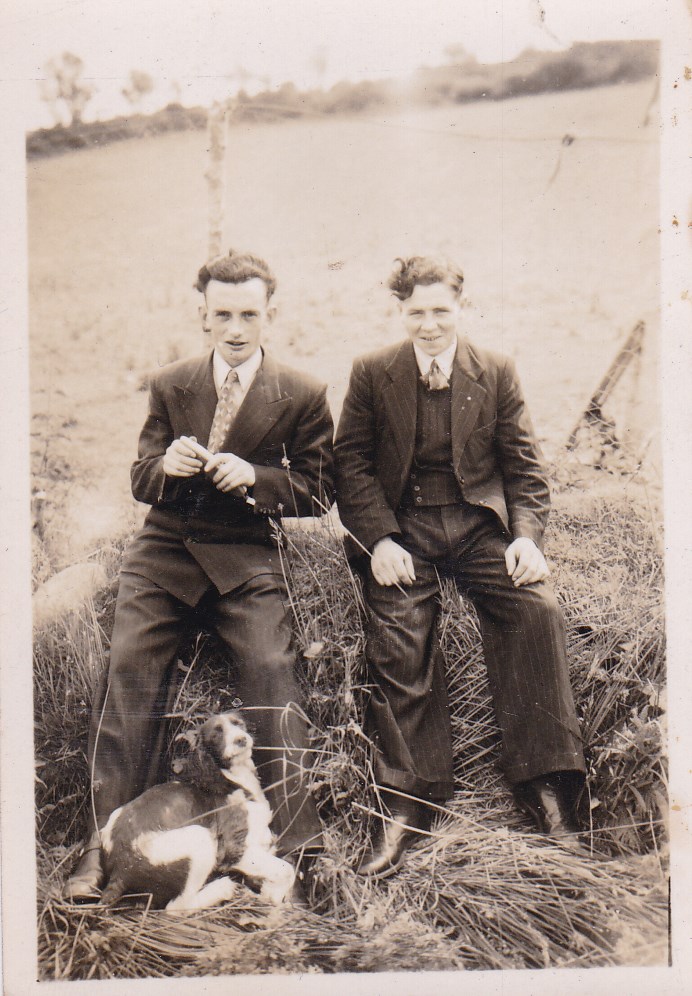 Who is the lad with the dogs?

None of these stories would compare to one told by a well known exaggerator and storyteller called Pat Mellon from Owenreagh.

Now Pat would tell a good story when he started and he told about being up at Lough Patrick shooting one day when suddenly what flew overhead but two wild ducks. He said that he had an old muzzle loading gun with him and that he was loading it using the ram rod to push the charge in.

“I was in such a hurry to shoot at the ducks, that I forgot to pull out the ram rod. I fired and did`nt I string the two ducks with the ram rod which had shot out with the charge. Down they came into the lough and I waded in to pull them out. I couldn’t figure why there was so much weight on the ram rod as I began to pull it out of the water. I gave it a giant heave and out it came, and what do you think was on the point of the ram rod along with the two ducks but a big salmon. Such was the force with which I yanked the catch from the water that I fell back on my backside and killed a hare which was passing by.”

(BELOW)           Paddy and McBride along with Eugene (nephew)  and Eileen Bradley pose with the hunting dogs. 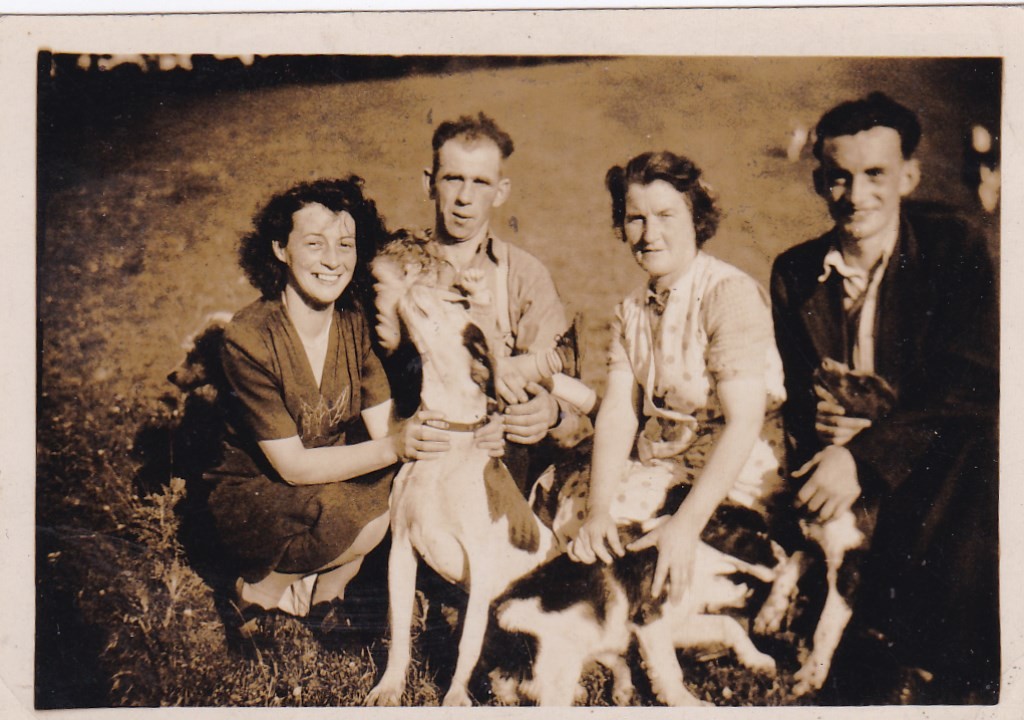 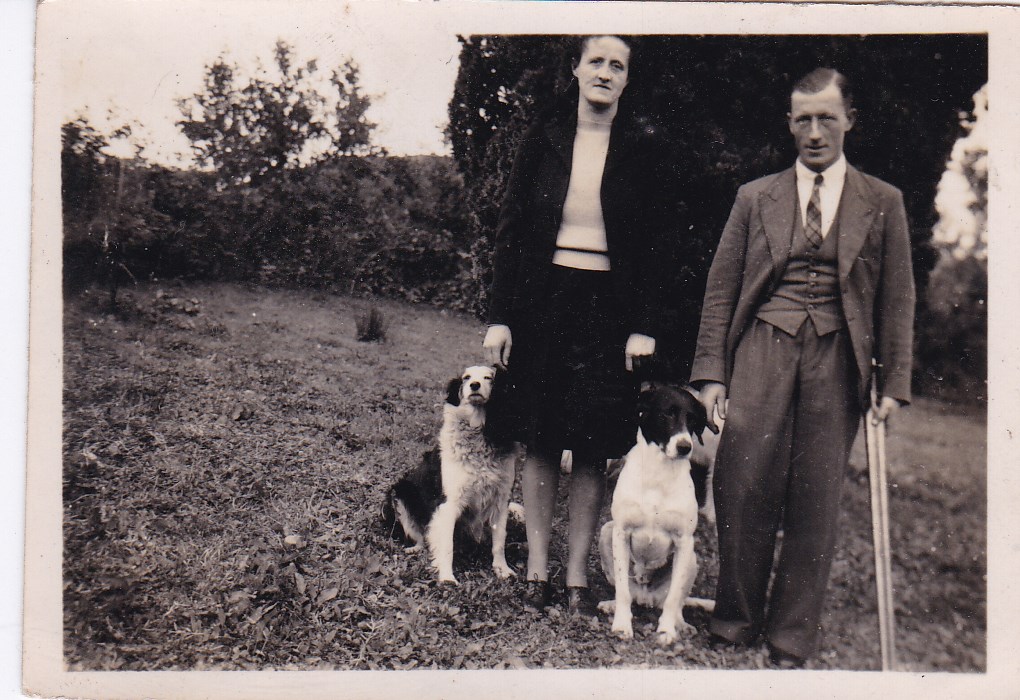 Johnnie Bradley and his sister Maryanne with the dogs as he sets out for a shot. 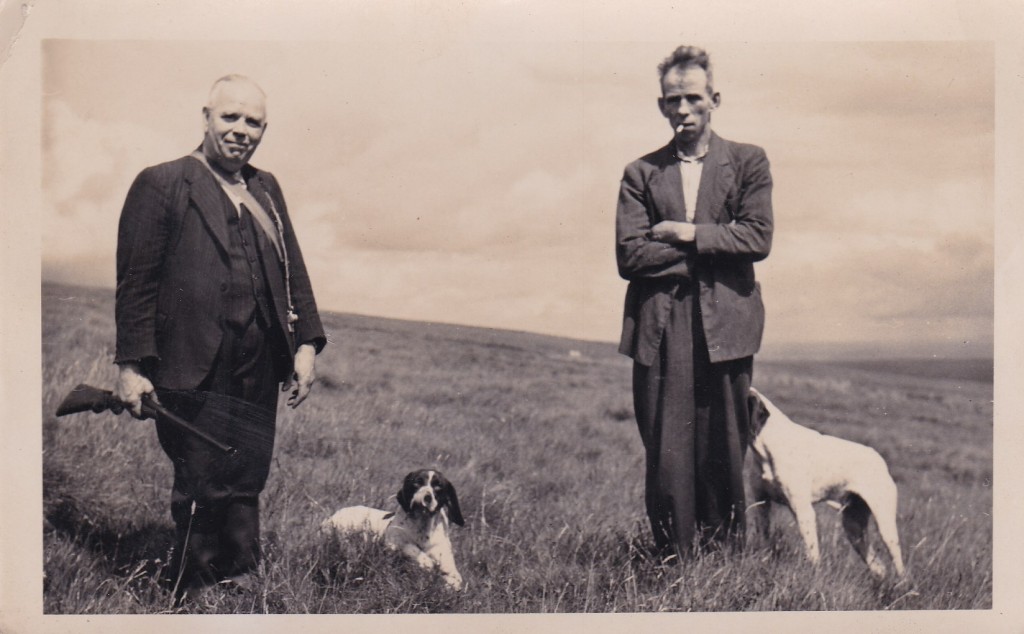 Paddy McBride and Johnny Kelly taking a break while out for a shot. 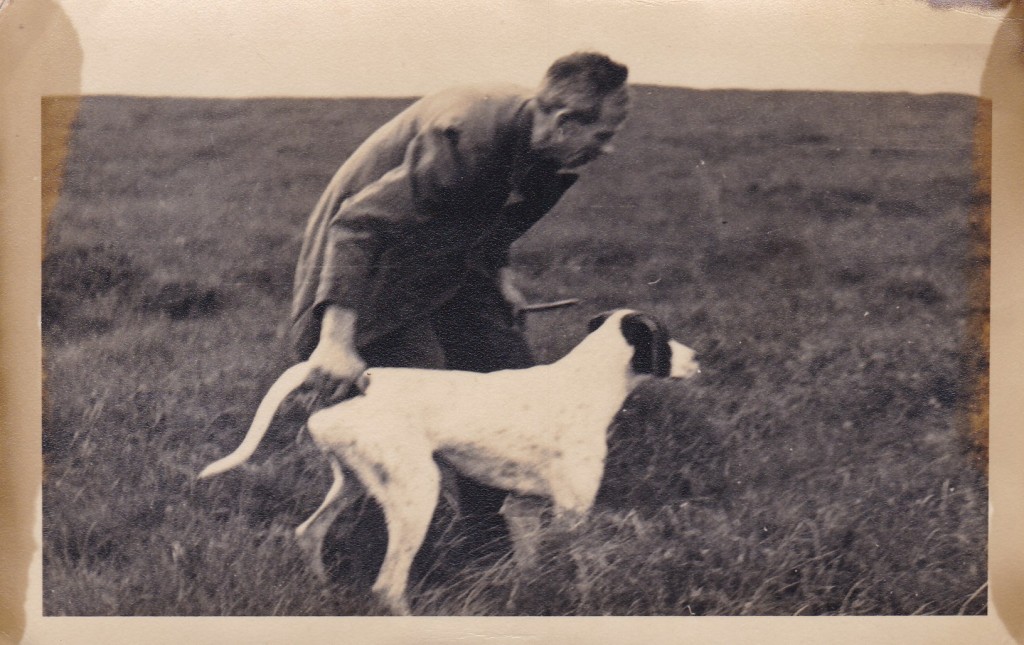 A good hunting dog is essential for a successful day of shooting. Grouse will sit on in the cover of the heather so that the hunter will miss them. A good dog will stalk  his prey and slowly move towards the bird until it rises when the hunter can shoot it. Here Paddy`s Pointer dog (also called Grouse)  has set on a bird and Paddy is coaxing him slowly towards his prey.